Almost 18 months after the passage of the Tax Cuts and Jobs Act of 2017 (TCJA), tax executives remain undecided about the law's impact on U.S. businesses, and many respondents continue to seek regulatory guidance to understand its full effect, according to the results of the 2019 Tax Policy Forecast Survey, published today by Miller & Chevalier Chartered and the National Foreign Trade Council (NFTC). 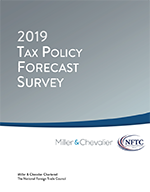 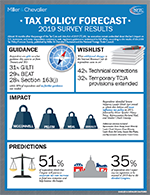 Nearly half of respondents saw their company's taxes decrease under TCJA, but executives don't think they can adequately assess the law's complete effect on their businesses without further clarifications. Although the U.S. Department of the Treasury and the Internal Revenue Service have issued a significant body of regulatory guidance on TCJA in the past year, executives remain unsure how they should plan and potentially restructure their businesses accordingly.

"TCJA is a complex piece of legislation with a myriad of business implications to consider before any shifts can be made," said Miller & Chevalier Chair Marc Gerson, former majority tax counsel to the House of Representatives' Committee on Ways and Means. "Our respondents' search for clarity shows that companies are doing their due diligence to understand the legislation."

In a near-even split, respondents identified global intangible low-taxed income (GILTI), the base erosion and anti-abuse tax (BEAT), and the limitation on the deduction of business interest expense as the TCJA provisions for which businesses need the most guidance.

"While most respondents agree that the reduction in the corporate tax rate from 35 percent to 21 percent was a key benefit of the legislation, the interaction of TCJA's international provisions with existing rules may result in the anticipated reduction to taxpayers' effective tax rates to be somewhat muted," said Miller & Chevalier Tax Department Member Loren Ponds, who is also a former majority tax counsel to the House of Representatives' Committee on Ways and Means. "Our respondents' attention to GILTI and BEAT shows that they're cognizant of the potential impact and are eager for regulatory guidance to address the nuances of the rules and certain perverse interactions that have come to light since TCJA's enactment."

In light of the divided Congress, a large percentage of respondents don't expect any tax legislation to advance this year despite significant interest in technical corrections to the TCJA and tax extenders.

"In particular, respondents have a close eye on the Tax Extender and Disaster Relief Act of 2019 that was recently introduced in the Senate, which would retroactively extend those provisions that expired at the end of 2017 and the end of 2018," said Miller & Chevalier Tax Department Member Jorge Castro, former counselor to the IRS Commissioner. "Respondents also have significant interest in Congress enacting technical corrections to TCJA. Absent such legislative action, pressure will continue to mount on Treasury and IRS to provide clarification."

Bipartisan agreement would be required to move tax extenders and technical corrections forward, which was reflected in respondents' belief that Senate Majority Leader Mitch McConnell (R-KY) would have the largest impact on tax policy this year, followed by House Speaker Nancy Pelosi (D-CA). But with a limited window of opportunity given the impending 2020 elections, the likelihood of such bipartisan legislation is not high.

"Respondents' view of congressional leaders as having the most influence on tax policy this year is in keeping with results we've seen in almost every one of our prior surveys," said Cathy Schultz, National Foreign Trade Council Vice President for Tax Policy.

Founded in 1920, Miller & Chevalier is a Washington, DC, law firm with a global perspective and leading practices in Tax, Litigation, International Law, Employee Benefits (including ERISA), White Collar Defense and Internal Investigations, and Government Affairs. Miller & Chevalier is a top-ranked firm sharply focused on targeted areas that interact with the federal government. Over the past three years, the firm's lawyers have represented more than 40 percent of the Fortune 100, one-quarter of the Fortune 500, and approximately 30 percent of the Global 100. Based in Washington, DC, a significant number of firm lawyers have held senior positions in the U.S. government and have written many of the regulations they currently help clients navigate. For more information on the firm, visit www.millerchevalier.com.

The National Foreign Trade Council (www.nftc.org) is a leading business organization advocating a rules-based world economy. Founded in 1914 by a group of American companies that supported an open world trading system, the NFTC and its affiliates now serve more than 200 member companies through its office in Washington, DC.