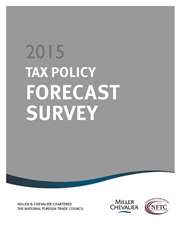 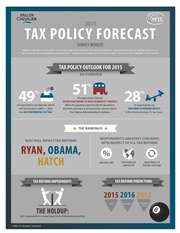 In last year's survey, a majority (71 percent) of respondents said that Republican control of both the House of Representatives and the Senate would tip the scales in favor of tax reform in 2015. But while the November elections brought that political change, our respondents now expect the stalemate between Congress and the White House to sink the chances for meaningful tax reform this year and next. While newly minted tax-writing-committee chairmen Rep. Paul Ryan (R-WI) and Sen. Orrin Hatch (R-UT) have both said they consider tax reform a top priority, our respondents believe the administration will halt any and all congressional action.

However, for the first time in years, respondents do see a glimmer of hope on the horizon. Almost half (49 percent) say that tax reform will be enacted in 2017 -- after the next presidential election. If and when tax reform does happen, 53 percent of respondents believe the most important issue to address will be the high statutory tax rates.

"The business community tells us that the high U.S. statutory tax rates are a major drag on international competitiveness relative to foreign-based businesses, and serve as a signature barrier to the U.S. as an investment location," said Miller & Chevalier member Marc Gerson, former majority tax counsel to the House of Representatives Committee on Ways and Means. "Further, their concern surrounding revenue offsets appears well-founded in light of the large number of revenue offsets that have been proposed in the context of tax reform proposals, as well as the number of new revenue offset proposals in President Obama's fiscal year 2016 budget plan. Additionally, in an increase of almost 10 percent from last year, nearly a quarter of respondents have told us that taxation of international operations is their highest U.S. concern in 2015."

"Given the survey results, it is clear that tax reform will continue to be a top priority for the business community," said Catherine Schultz, vice president for tax policy at the NFTC. "It is also clear that unless the administration is willing to become fully engaged, and shows a willingness to compromise with the GOP-led tax-writing committees, the chances for tax reform before the next presidential election look increasingly dim. International tax pressures are making it more difficult for multinational businesses to compete globally. Without a more competitive tax system, it will be harder for the U.S. to attract foreign direct investment, and for American companies to compete on a level playing field."

Founded in 1920, Miller & Chevalier is a Washington, DC, law firm with a global perspective and leading practices in Tax, Employee Benefits (including ERISA), International Law and Business, White Collar and Internal Investigations, Complex Litigation and Government Affairs. In an era of big law, Miller & Chevalier is a top-ranked firm sharply focused on targeted areas that interact with the federal government. Over the past three years, the firm's lawyers have represented more than 40 percent of the Fortune 100, one-quarter of the Fortune 500 and approximately 30 percent of the Global 100. Based in Washington, DC, a significant number of firm lawyers have held senior positions in the U.S. government and have written many of the regulations they currently help clients navigate. For more information on the firm, visit www.millerchevalier.com.

The National Foreign Trade Council (www.nftc.org) is a leading business organization advocating an open, rules-based global trading system. Founded in 1914 by a broad-based group of American companies, the NFTC now serves hundreds of member companies through its offices in Washington, DC, and New York.