Washington, DC, September 9, 2019 – Miller & Chevalier Chartered is pleased to announce that the firm was selected to receive the 2019 Daniel M. Gribbon Pro Bono Advocacy Award, which honors an individual or firm that has demonstrated distinguished advocacy before the U.S. District Court for the District of Columbia in a pro bono matter. The award was presented to the firm today by representatives from the DC Judicial Conference's committee on pro bono services.

Miller & Chevalier was recognized for its longtime representation of George Melvin Jenkins in seeking to upgrade the status of his discharge from the U.S. Army. Over a five-year period, Mr. Jenkins was represented by Members Homer E. Moyer, Jr. and Brian A. Hill, Counsel Ann Sultan and Aiysha S. Hussain, and Pro Bono Counsel Kathleen (Kitty) Wach. 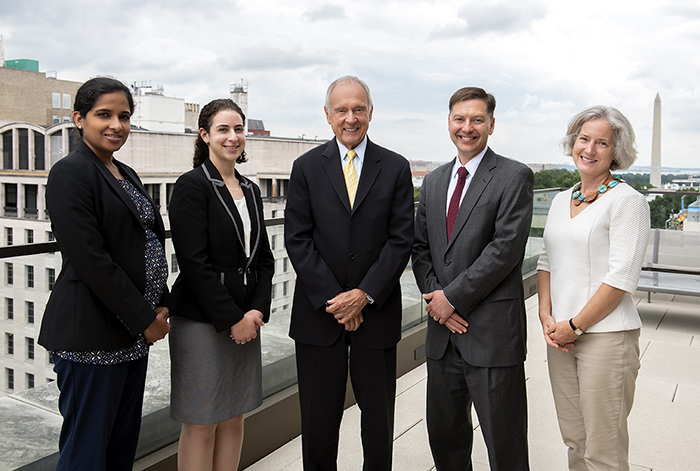 In 1982, Mr. Jenkins was convicted by a U.S. Army court-martial for stealing government property, resulting in a two-year prison sentence, despite doubts expressed by reviewing authorities about his guilt and the recantation of the prosecution's key witness. Five years later, the case was set aside due to the prosecution's failure to disclose its key witness' felony conviction.

At that juncture, Mr. Jenkins was contacted by U.S. Army counsel who urged him to sign an administrative discharge form but failed to advise him of the considerations that would warrant a re-trial, as U.S. Army regulations required. Mr. Jenkins signed the form, resulting in an "other than honorable discharge" that disqualified him from veterans' health benefits. Facing health issues, Mr. Jenkins twice applied for a discharge upgrade from the Army Board for Correction of Military Records (ABCMR) and was twice denied. It was at this point in August 2013 that Miller & Chevalier became involved in the case.

"It was clear early on that Mr. Jenkins's assigned counsel had disregarded explicit requirements of Army regulations," said Moyer, who had been called by Mr. Jenkins' partner for assistance. "We felt the Board's denials of a discharge upgrade ignored these legal issues, and we felt compelled to help Mr. Jenkins attain his rightful veteran status that would qualify him for much needed medical care and benefits."

Over the following years, the firm filed three additional applications and a complaint in the U.S. District Court of Columbia arguing both that Army counsel had violated Army regulations and that the ABCMR had relied on hypothesized facts that were not in the record. The Court ultimately determined that the ABCMR could not entirely rely on Mr. Jenkins' signed form when other evidence showed that he had not been properly advised. On October 25, 2017, the U.S. Army ordered that Mr. Jenkins' discharge be upgraded to a general discharge under honorable conditions. Miller & Chevalier later sought the recovery of attorney's fees and donated the entirety to Mr. Jenkins, which he used to purchase his first home.

"On behalf of the firm, I am thrilled with the outstanding result our team obtained for our client, Mr. Jenkins, who will now receive the care and benefits he deserved," said Kathryn Cameron Atkinson, Chair of Miller & Chevalier. "I am very proud of my colleagues, and we appreciate the recognition of our pro bono work by the court."