Washington, DC, July 8, 2020 – Despite Latin America's anti-corruption progress over the last decade, including blockbuster investigations, high-powered politicians and business leaders behind bars, and improved laws in key jurisdictions, new survey data reveals corruption risk to be at an all-time high across the region. 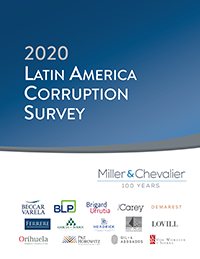 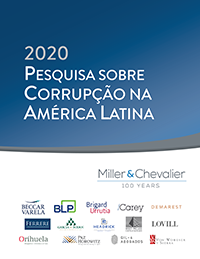 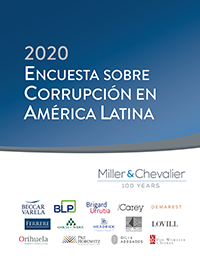 The 2020 Latin America Corruption Survey, released today by Miller & Chevalier Chartered and 14 partner firms, tracks perspectives on anti-corruption issues in the region since 2008. This year, 54 percent of survey respondents said corruption is a significant obstacle to doing business – up 10 percent since 2012 – while only 45 percent of respondents believe offenders are likely to be prosecuted, down from 66 percent in 2008.

"This year's findings hint at a 'two steps forward, one step back' sentiment among respondents," said Miller & Chevalier Member and International Department Chair James Tillen. "These setbacks aren't uncommon, particularly when the experiences of people on the ground are still rife with corruption risk, in spite of all the talk and headline-grabbing cases."

The findings of the survey, which was performed just before the COVID-19 outbreak, offer important insight to understanding the region's current challenges. "In this new COVID-19 era, Latin America faces a toxic mix of factors, from increased government emergency spending that bypasses standard public procurement rules, to business leaders in survival mode cutting corporate compliance budgets, to employees facing pressures to meet their numbers," said Matteson Ellis, Miller & Chevalier's Latin America Practice Lead. "Add to this mix the fact that business professionals were already noting high corruption levels before the pandemic began, and the result is a perfect storm for misconduct to thrive, making corporate compliance safeguards more important now than ever."

The survey results on common areas of bribery risk bring into focus specific COVID-related corruption threats, like greater leverage by government officials to extract bribe payments, the potential for accounting manipulation by employees in areas like revenue recognition, and improper payments paid offers to public officials to unlock logistics bottlenecks as supplier chains have been disrupted.

The survey reveals that more companies, both local/regional companies and multinationals, are embracing corporate anti-corruption compliance standards, a trend that has steadily increased over the last decade. "Increased government enforcement and expectations, in tandem with growing commercial pressures, have contributed to respondents in 2020 reporting the highest levels of anti-corruption training and anti-corruption policies since 2012," said Miller & Chevalier Member and International Department Vice Chair Alejandra Montenegro Almonte. "Nearly 60 percent now report their companies have established full-time compliance personnel, and third-party management efforts have also shot up. The increased adoption of these and other nuanced compliance measures suggests substantive attempts by companies to implement effective controls and procedures."

Miller & Chevalier Counsel Gregory Bates added, "Those of us who have worked in-house will recognize the great value of the survey's detailed findings on specific compliance practices in the region, since the data enables companies to benchmark their own efforts against those of others on a country-specific basis."

Nearly 1,000 compliance officers, senior executives, directors, and in-house lawyers participated in the survey, which gauged respondents' familiarity with local anti-corruption laws, local governments' investigation and enforcement efforts, and the steps their own companies are taking to combat corruption.

A full copy of the survey results and analysis are available in English, Portuguese, and Spanish.