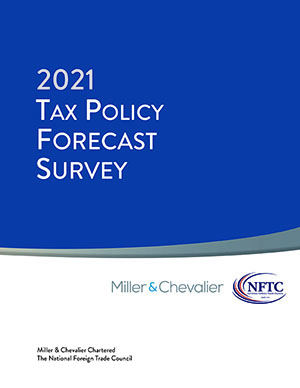 Last week, we released the 15th Annual Tax Policy Forecast Survey with our friends at the National Foreign Trade Council. Not surprisingly, survey respondents are particularly concerned about potential tax increases in light of President Biden's campaign proposals and the need to fund significant policy initiatives. Unfortunately, this concern has proven to be well-founded, since following the issuance of the survey we have seen a proliferation of revenue raising provisions under consideration, including the pending retroactive repeal of the worldwide interest expense allocation election and the robust debate around repealing the CARES Act NOL/excess business loss relief provisions in the context of the COVID-19 relief legislation currently under consideration. And as we noted in last week's edition of Tax Take, discussions around a potential financial transaction tax have also picked up steam. Finally, the highly anticipated release of the so-called "Greenbook" (or as it is officially known, the General Explanation of the Administration's Revenue Proposals) this spring will certainly add to the debate regarding potential tax increases. We are expecting to see detail regarding the potential scope, application, and effective dates of the proposals put forth by the Biden Administration as part of the budget process.

The survey respondents' concerns regarding potential tax increases were further confirmed by the proposed expansion of Section 162(m) contained in the COVID-19 relief legislation. Under current law, Section 162(m) provides a $1 million dollar limit on the amount of deductible compensation that a company can pay its CEO, CFO, and the other three most highly paid executives (the Top 5). The new provision being considered would increase the application of the deductibility limitation, expanding the pool of employees covered from the "Top 5" highly compensated individuals to the "Top 10" highly compensated individuals, effective for taxable years beginning after December 31, 2026. The delayed effective date, which was necessary for the bill to comply with applicable reconciliation rules, gives taxpayers more than sufficient time to prepare for this change and also provides the potential that there will be future efforts to repeal or further delay the proposed expansion of Section 162(m). Consideration of this proposal, once again, highlights the risk that significant tax increases are not only "in play" this year, but that they can be added without notice as bills move swiftly through the legislative process. #TaxTake

Marc commented on Senator Warren's new wealth tax proposal in InvestmentNews. To keep the Senate Democratic caucus on board with such a proposal, a wealth tax bill might have to transform from "aspirational to practical" as it goes through the legislative process. "That means reconsideration of the scope and appropriateness of any tax increase," Gerson noted. "The question is how do you define wealth and how do you tax wealth."

The information contained in this communication is not intended as legal advice or as an opinion on specific facts. This information is not intended to create, and receipt of it does not constitute, a lawyer-client relationship. For more information, please contact one of the senders or your existing Miller & Chevalier lawyer contact. The invitation to contact the firm and its lawyers is not to be construed as a solicitation for legal work. Any new lawyer-client relationship will be confirmed in writing.

This, and related communications, are protected by copyright laws and treaties. You may make a single copy for personal use. You may make copies for others, but not for commercial purposes. If you give a copy to anyone else, it must be in its original, unmodified form, and must include all attributions of authorship, copyright notices, and republication notices. Except as described above, it is unlawful to copy, republish, redistribute, and/or alter this presentation without prior written consent of the copyright holder.