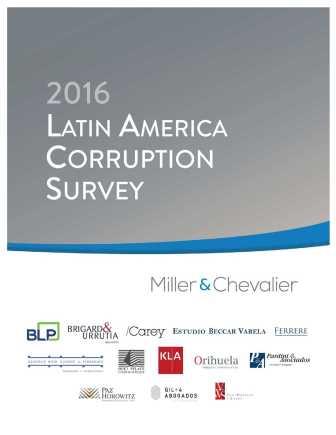 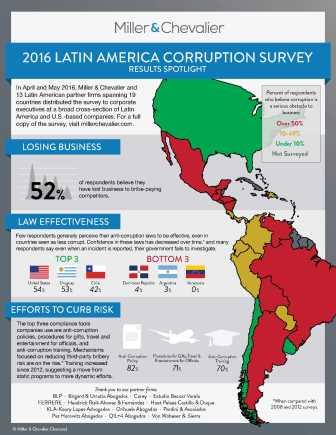 "Given the number of headline corruption issues in Latin America, it is not surprising that few respondents see a noticeable improvement in their country’s anti-corruption programs," said Miller & Chevalier Member Matteson Ellis. "Between Brazil’s Petrobras scandal and Lava Jato investigation, and well-publicized misconduct in other countries like Colombia, Chile and Mexico, we see a clear need for increased anti-corruption legal action in the region. Recent developments like the new Mexican anti-corruption system are long-awaited steps in the right direction."

"While many of the responses in this year’s survey suggest enduring risks and ossified attitudes in Latin America, we also see signs of regionwide improvement in some areas," said James Tillen, Member and Vice Chair of the International Department at Miller & Chevalier. "For example, we are observing significant growth in anti-corruption compliance efforts in a number of key markets, as well as a greater number of companies that are aware of the relevant anti-corruption legislation that pertains to them, which is a good sign for the region overall."

"Despite continued pessimism in the region about the effectiveness of local anti-corruption laws, we expect recent headline-catching corruption investigations of individuals– such as the former president of Guatemala, the daughter-in-law of Chile's president, and numerous high-ranking officials in Brazil – to begin to shift opinions about the enforcement of corruption laws over the next several years," said Saskia Zandieh, Counsel at Miller & Chevalier.  "In addition, the recent adoption of new anti-corruption legislation in many countries – such as Brazil, Mexico and Colombia – and continued FCPA enforcement relating to Latin America could also shift opinion. Stay tuned for our 2020 survey."

In April and May 2016, Miller & Chevalier and 13 Latin American partner firms distributed the survey to corporate executives based in 19 countries working in a broad cross-section of industries. 637 individuals completed the survey, which was made available in English, Spanish and Portuguese.

Founded in 1920, Miller & Chevalier is a Washington, DC law firm with a global perspective and leading practices in Tax, Employee Benefits (including ERISA), International Law and Business, White Collar and Internal Investigations, Complex Litigation and Government Affairs. In an era of big law, Miller & Chevalier is a top-ranked firm sharply focused on targeted areas that interact with the federal government. Over the past three years, the firm's lawyers have represented more than 40 percent of the Fortune 100, one-quarter of the Fortune 500 and approximately 30 percent of the Global 100. Based in Washington, DC, a significant number of firm lawyers have held senior positions in the U.S. government and have written many of the regulations they currently help clients navigate. For more information on the firm, visit www.millerchevalier.com.